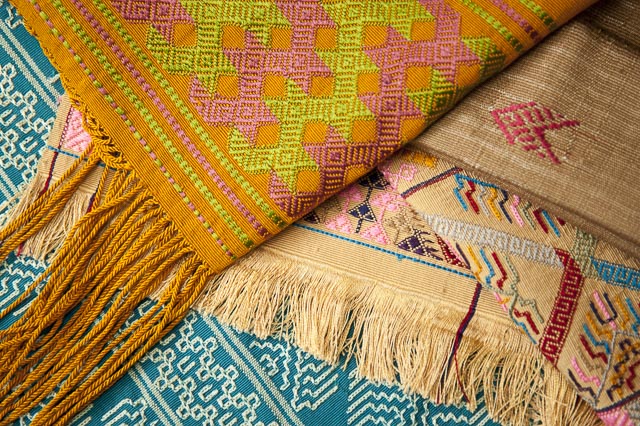 Walk into any international textile gallery, conservator’s conference, or rare textile market: even to the untrained eye, Bhutanese weaves are unmistakable.

The color, intricacy, and timelessness of Bhutanese weaves captivate and intrigue those who behold them. Beyond Bhutan, these fabrics are a rarity, and for a time, the rarest and most precious could not be found even in Bhutan, having been sold to private buyers and museums by amateur collectors. All that changed when the Friends of the Royal Textile Academy of Bhutan (FRTAB) stepped in 15 years ago to return this unique world heritage to the nation and the people who created it. Now, “Textiles have become Bhutan’s most powerful emblem abroad” (Diana K. Myers, From the Land of the Thunder Dragon).

Here are the qualities that make these extraordinary fabrics such an eye-catching and vibrant expression of a culture that has much to teach modern society about manufacture, craft, beauty, and sustainability: 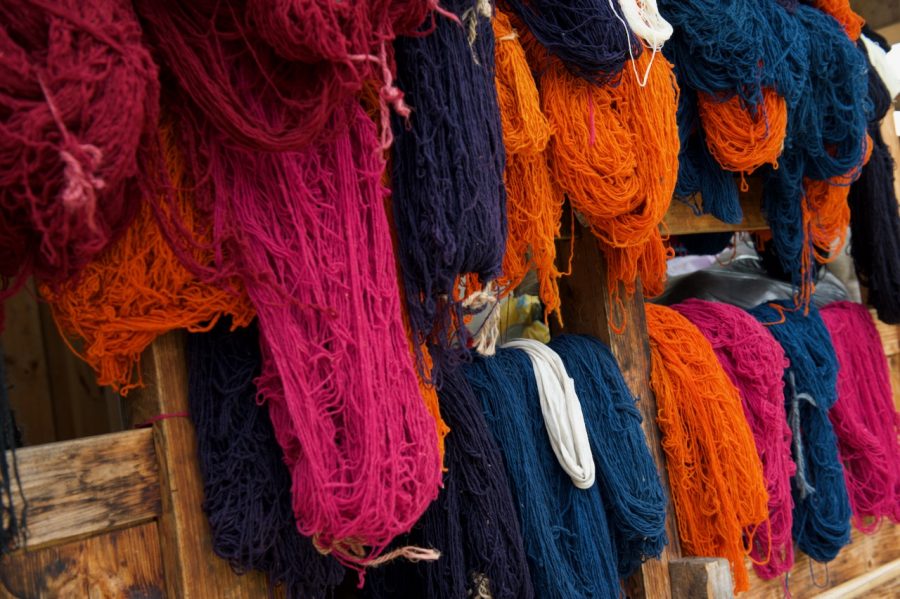 Bhutanese weaves shimmer with color. Their irridescent hue is the product of all-natural dyes from wild roots and cultivated plants and vegetables typically found in household gardens: indigo, madder, turmeric, lac, ash, walnut, and zim or sapphire-berry, to name a few. Each dye is subject to the variations of weather and season, and dyeing formulas can be a closely guarded secret, with color an indicator of the region of origin. For example, Aikapur cloth which is produced in the eastern part of the country and is considered the most technically complex of all Bhutanese textiles, is derived from the traditional colour palette of white and yellow designs on a red background. Selection of color is often akin to a spiritual exercise.

The fabric is created with a diversity of ingredients — most notably raw or eri silk, but often cotton and wool. The yak hair used in certain regions confers a water-resistant quality on some the weaves. Nettles were among the earliest fibers used and are still used today in some regions. 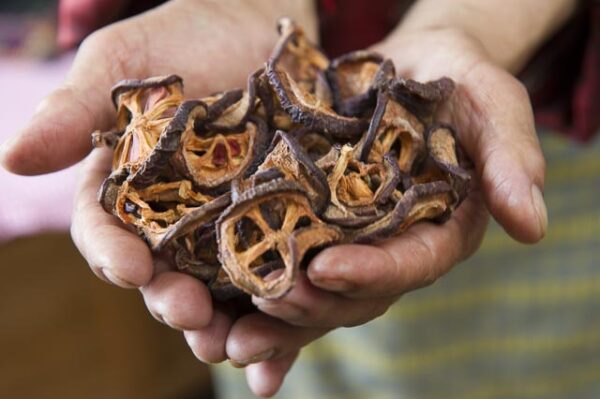 Intricacy of design and labor intensity 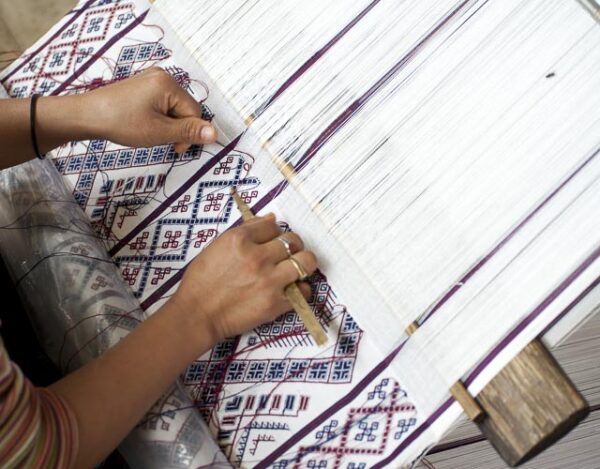 The patterns of a Kushuthara emerge (Banerjee)

“Handweaving is hard work,” as Rinzin Dorji, Executive Director of the Royal Textile Academy, reminds us. Working the traditional backstrap loom is physically demanding, and an entire day might produce only two inches of fabric. Weaving a high quality gho or kira, the national garments for Bhutanese men and women, can take years, and even longer for ceremonial garments used in Bhuddist rites or cultural celebrations. Bhutanese weaves are considered among the most technically challenging, with weavers knotting individual silk threads into motifs so intricate that they resemble embroidery.

Cloth for currency, craft, and ceremony, created exclusively by women 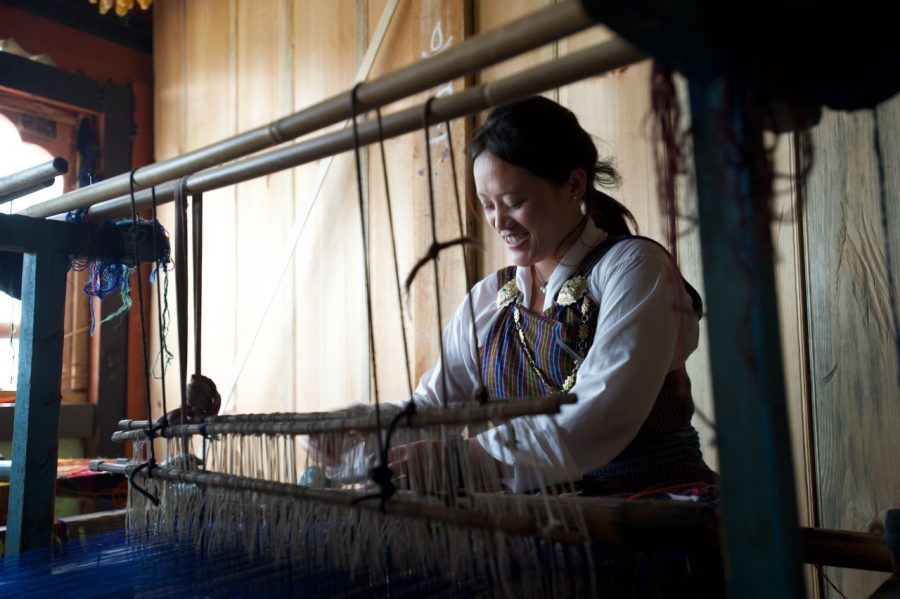 The art of weaving has been passed down from mother to daughter, from grandmother to grand-daughter, for hundreds of years. Women have been creators of utility, religious and ceremonial relics, and currency from when Bhutan’s economy was primarily based on barter (the Dzongkha word for “cloth” is related to the word for trade). The textile arts are essential to the constitution of social life and the practice of religion, writes Myers: “Bhutanese weaves are rooted in an aesthetic that flourishes on faithfulness to traditional models, while valuing creativity and innovation within a form.”

With nearly half of Bhutan’s population involved in some aspect of weaving throughout the year, weaves are integral to every aspect of Bhutanese culture, enmeshed in social hierarchy, wealth, political rank, and commerce, with most of the country’s weaving occuring in the eastern region of Bhutan.  Easy-care, cheaply made factory cloth from India and China now competes with handloomed fabric and poses a serious threat to the hand-made economy.

An embodiment of spiritual and ethical values 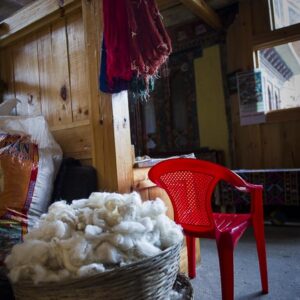 Of all the textiles of Southeast Asia, none more consummately expresses the Buddhist ethic of kindness than the weaves of Bhutan. “Sericulture” or silkfarming in other countries typically involves the killing of silkworms and has never been sanctioned in Bhutan. The weaves are an emodiment of the Bhuddist values of kindness and respect for the earth and all living creatures, as evidenced by the reliance on wild and eri silkworms which are used to produce what is sometimes called “peace silk.” The very process of cultivating the silk is designed to protect and sustain rather than injure. The word for silk, “dar,” is also the verb “to flourish, prosper, spread.”

Hingtham: An expression of devotion 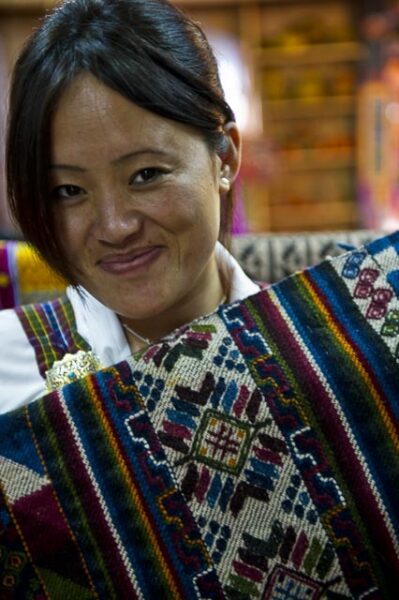 Kinley with her finished weave (Banerjee)